An Interview with Jessica Robblee, director of Animal Farm

As an actor in the Arvada Center Black Box Repertory company, Jessica has appeared in Sylvia, The Moors, Sin Street Social Club, Sense and Sensibility, and The Drowning Girls. This year she takes her spot in the director’s chair to tackle talking animals, class struggle, and staging an adaptation that challenges us to reconsider our own politics.

The following interview is a firsthand look into the vision of the director for this play, production, and how it fits into today’s world.

Directed and staged for the Arvada Center by Jessica Robblee

Through May 21, in repertory

LR: When did you first read Animal Farm?

JR: I never read Animal Farm in school (no idea how I managed that, but it’s true). I came to the book as an adult. His spare and lovely writing — the way his fine allegory gives you fresh eyes — made me pay attention. It scared me. It broke my heart. It told me how the world isn’t what we want to believe it is. It told me we need to witness the bad to find the good. This story showcases some universal truths about how humankind’s intentions, even when good, can be warped for the worst.

LR: Focusing on some positives, what do you love about Animal Farm?

JR: It engenders sympathy in us for all of the farm animals from the start. I guiltily noticed the power of this unique brand of sympathy we give to animals but don’t always muster up for our fellow humans. But you said positive! Orwell’s writing is lovely and his sense of humor is on point. He gifts us with some truly funny characters and moments.

The cast of Animal Farm. All photos in this story are by Amanda Tipton.

LR: What do you think of the political impact of the play in our culture today?

JR: People of all political stripes tell me a production of Animal Farm is “so timely,” and it leaves me thinking that the tricky part of how we latch onto this book is that we often see it supporting our previously held points of view. We hold it up righteously at the pigs and Joneses we see in our lives.

LR: That being said, a great deal has changed since the 1940s. How do you think this story might be different if Orwell had seen what we are seeing?

JR: People have conjectured over what Orwell would think of so many things. It is a very fun game. Let’s see… Perhaps he could continue the story to include:

- Animals coming forward to share they do not care to fit the expected definition of their species.

- Animals tearing down the windmill to get someone to listen to them.

- These dire circumstances pressing the animals to notice and employ the best systems from all over the county to make it possible for all animals to be free and equal.

But that last one doesn’t sound too Orwell to me. Even though that’s what he was aiming for.

LR: The Black Box Rep seems to have a bit of a penchant for actors playing animals. The Moors, most recently yourself in Sylvia, and now Animal Farm. What is it about personified animals that connects us to our humanity? Why is it so entertaining?

JR: Animals, in art and in life, help us see things in new ways. And, man oh man, do we need that—the honesty of animals, the different lens through which they see the world. It gives us a distance we need, I think. As an actor, it gives you great new pathways to move and communicate differently, to consider your priorities differently. It’s freeing for the actor and the audience to really just go for it, to pretend. To believe and pretend often helps me to see. 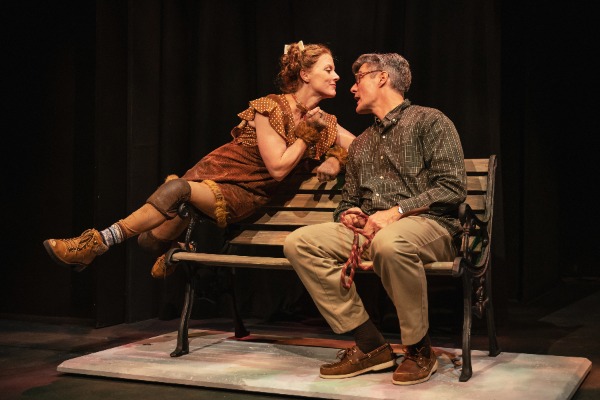 Jessica Robble as Sylvia in Sylvia, with Gareth Saxe.

LR: With which animal in the story do you most closely associate?

JR: I have some Boxer in me...The Robblee family believes in working hard, that’s for sure. But I must confess that I am the one in my family who tends toward questioning it all quite frequently, so that also lands me in an observing, wondering, parsing place like Clover. She observes closely, she loves deeply, she cares very much that she doesn’t hurt a little duckling in the straw, and she does not read as much as she should. I definitely aspire to have more Snowball and Hen coursing through my veins.

LR: The full title of this book, and of this adaptation is Animal Farm: A Faerie [Fairy] Story. What should adults learn from fairy tales?

JR: We need to learn scary lessons and fairy stories help us want to do that. They help us attend, and by attend, I mean listen so new stuff actually gets in there. It is hard to learn when we need to sleep and eat and work so we can buy the next thing we’ll eat. Orwell designed Animal Farm to be accessible to many, to take his ideas to many people and countries, to shock us by welcoming us into a familiar, pastoral system, one with inhabitants we are rather wired to care for because they’re cute and “poor things, aren’t they subordinate and helpless” and then root for them as they rise up!

LR: Characters narrate some of their own actions in this telling of the story. This isn’t how characters speak in the original text. Why do you think the adaptor chose this method to translate the story from literature to live theatre?

JR: This style of staging classic literature has been out there a while in the realm of stage adaptations. I’m sure it has been used in many places, but I first learned of it through a friend who worked with a Seattle company that called it Book-It Style. Theatrically speaking, when you narrate an action, you cannot take that action for granted. It shakes up how we hear/see stories, creating a distance from which something can be seen anew, and early in his career, Orwell went through a spell of narrating the action he witnessed around him.

LR: George Orwell was an outspoken Democratic Socialist. What do you think he aimed to say about socialism in particular with this story?

JR: He believed Russia’s system was calling itself Socialism when in fact it had morphed into a monstrous totalitarian regime. He puts forward what Socialism is meant to be — better lives for all beings, free of classism — and how power-grabs destroy that. He believed Russians aimed for Socialism and missed, and he wanted people to see that so that they could start over, aiming for true Socialism. 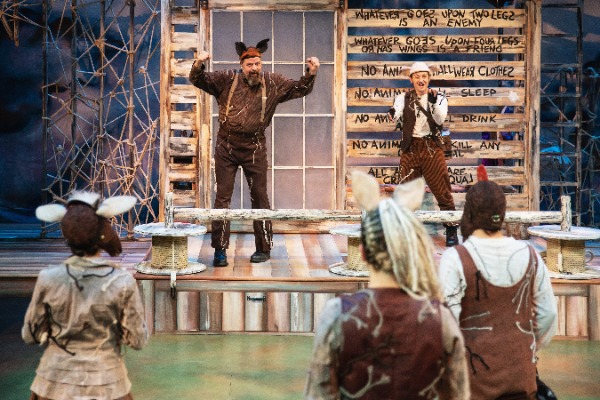 Logan Ernstthal as Napoleon and Sean Scrutchins as Squealer in Animal Farm.

LR: What of our contemporary American social philosophy do you see in Animalism and the changes it undergoes?

LR: Yes, it often feels like the world moves so fast that I can’t keep up. How might this story help us cope with this new reality?

JR: I think good changes in our social philosophy are happening because of people trying – like Orwell – to interrupt the status quo. But we’re making missteps, talking over people, changing rules so frequently people don’t know how to keep up, policing each other fiercely, typing more than we talk, and most of us don’t want to give up our beds for others who don’t have them.

How do we get to a place less divisive where we can trust that a rising tide of openness will lift all boats? No matter what side of the aisle you’re on, Orwell would likely tell you a lot of uncomfortable things, so if some of what audiences experience challenges them, maybe that’s a good sign.