Asleep At The Wheel

Still “Comin’ Right At Ya!” - Celebrating 50 Years of Asleep at the Wheel

The number of individual artists and bands who have sustained a thriving career for a half-century is infinitesimally small.  Against all odds, Asleep At the Wheel is one of these. The stars aligned in 1970 when three friends Ray Benson, Lucky Oceans and Leroy Preston moved to Paw Paw, West Virginia (it’s not a made-up place, you can look it up).  It was there that their dream of forming a band began after a mutual friend gave them access to his uncle’s cabin on an apple orchard just outside of town.  The three friends began to – quite literally -- woodshed and found others who would join them in their mission to play old-style Roots/Americana music. This was long before the genre/movement even had a name.  After a trip to the outhouse, Lucky lived up to his name and suggested the band be called Asleep at the Wheel and so it was to be for the next 50 years.

Since its inception, Asleep at the Wheel has received 10 Grammy® Awards, was cited by the Country Music Association as 1976 Touring Band of the Year and was given a Lifetime Achievement Award by the Americana Music Association in 2009. They have released 31 albums, charted more than 20 singles on the country charts. Billboard commented on the band’s catalog most succinctly: “Everything this act has ever released is simply spectacular.

Most recently, Asleep at the Wheel has been invigorated by a fresh new lineup and the release of New Routes, their latest album that is a bracing blend of original songs and vibrant cover material along with some unanticipated new musical tangents.  Asleep At The Wheel have demonstrated convincingly, that they are more relevant, enjoyable and musically nimble than at any time in its 50-year history. The 6’7” Ray Benson has been the one constant in Asleep At the Wheel since 1970.  He notes, “I've been told that I'm relentless, so I guess I am….  I’m just doing what I believe I’m meant to do — I’m singing and playing and writing better than I ever have. My role and concept of leading a band has never changed, It’s gathering the best musicians I can find or convince to play to the best of their ability, and I just try and make the best decisions possible and kick some ass every night onstage. I’ve made it this far and don’t feel like I or the band will be slowing down anytime soon.”

Asleep At The Wheel

Asleep at the Wheel

Asleep at the Wheel landed a gig opening for Alice Cooper and Hot Tuna in Washington, DC in 1970. At the height of Vietnam, many Americans were using their choice of music to express their stance on the conflict in southeast Asia. "We wanted to break that mold," said Benson. "We were concerned more with this amazing roots music, which we felt was being lost amid the politics. We were too country for the rock folks and we were too long-haired for the country folks. But everybody got over it once the music started playing."

A year later, they were coaxed into moving to California by Commander Cody, leader of Commander Cody & His Lost Planet Airmen. But, the band’s big break came when Van Morrison mentioned them in an interview with Rolling Stone "there's some relatively unknown group around that I really dig. Asleep at the Wheel, they play great country music." Van Morrison Rolling Stone Interview (1973). The record offers started coming in and The Wheel got rolling.

The musicianship of Asleep at the Wheel has become the stuff of legends. Reuter’s pegged The Wheel as "one of the best live acts in the business." Taking a page from Bob Wills’ book, the band has constantly toured at a national level throughout its history; with anywhere from 7-15 of the finest players Ray Benson could talk into jumping in the bus to play a string of dates. The alumni roster is well over 80+ members, and includes an impressive list of musicians who have gone on to perform with artists such as Bob Dylan, George Strait, Van Morrison, Lyle Lovett, Ryan Adams, and many more. A quick scan of awards, such as "Touring Band of the Year" (CMAs, 1976) and "Lifetime Achievement in Performance" (Americana Music Awards 2009), not to mention near dominance of the GRAMMY "Country Instrumental" category over the years, reflects the reputation of the band’s musicianship. Ray Benson fell in love with western swing because of its unique combination of elements of American blues, swing and traditional fiddling but also for its demanding musical chops. Western swing is what Benson calls "jazz with a cowboy hat," is a thrill to hear live, and thanks in large part to the Wheel’s 40+ years of promotion, is a living and creative genre of music today.

The tradition of gypsy jazz is alive and well in Colorado. Denver-based LAPOMPE combines rustic gypsy swing with vintage blues and soulful originals to create a unique sound and style. The string quartet features two guitars, vocals, upright bass and violin and crafts a musical pulse full of energy and excitement. The band has been nominated by multiple publications for best jazz band on the front range and won the 2017 Producers Choice award at the Westword Music Showcase. With that, on top of headlining spots at City Park Jazz and the Speakeasy Soiree, and a prestigious recurring weekly gig at Denver's Union Station, LAPOMPE is quickly becoming "Denver's Jazz Band." 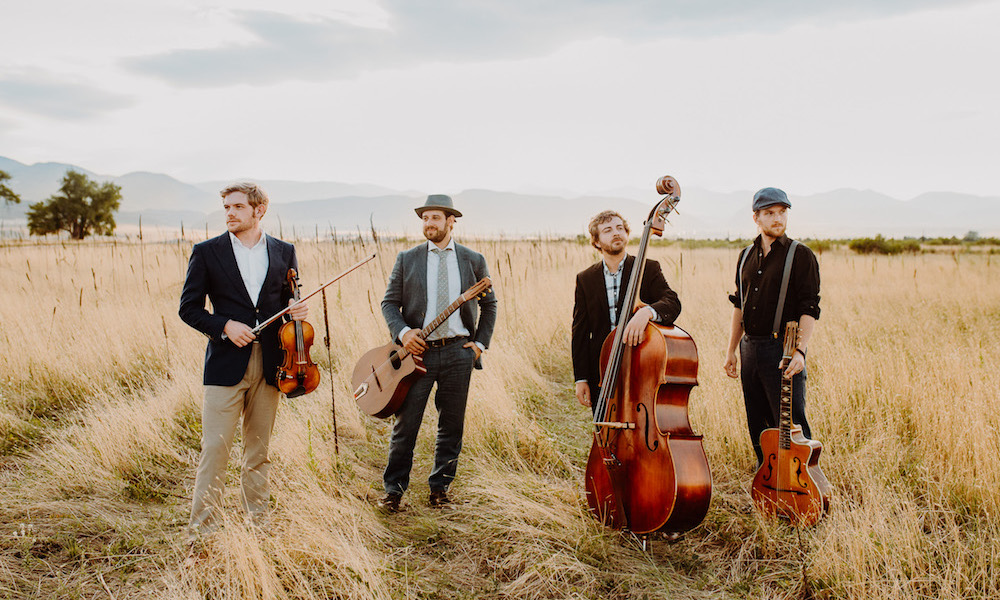 This concert is outdoors, and will be held rain or shine. Please leave pets other than service animals, outside food and alcohol, and lawn chairs with legs at home.

The Arvada Center is proud to partner with Three Tomatoes Catering to provide a new, elevated food menu for our summer concert series. Check out the available options at the link below. Learn more about Three Tomatoes on their website.

Along with this new food menu, beer, wine, and cocktails will also be available for purchase on the plaza as well as at the bar inside the Center. Please do not bring outside food or alcohol with you for this concert.